Some historians say Martin Luther posted 95 theses on the door of Wittenberg’s castle church on October 31, 1517, five hundred years ago today. Others say he never posted the theses at all. One thing is certain: Martin Luther had a lot to say about beer.

BachBeer is honoring the quincentennial of Luther’s theses with a series of posts about the Reformer’s thoughts on our favorite beverage. Today we present Luther’s beer theses—five statements that summarize the attitudes toward beer that Luther shared in his sermons and table talk.

The First Thesis: Beer is good.

As we explained in our last post, Luther admitted in a 1522 sermon that he enjoyed a good beer after work. In 1539, he again endorsed beer from the pulpit. “God does not forbid you to drink,” he said in a sermon. “He permits you to drink wine and beer.”

The Second Thesis: Too much beer is bad.

Immediately after Luther said Christians could drink beer, he qualified his statement. In the 1539 sermon, he urged his listeners, “do not make a pig of yourself; remain a human being.” Then the former Augustinian monk invoked Saint Augustine: “If you have been a pig, then stop being one. Augustine said: I have known many who were drunkards and then ceased being drunkards.”

Luther also told brewers how they should do their job. In 1528, he preached ten sermons on the Catechism. When he reached the seventh of the Ten Commandments—Thou shalt not steal—he had strong words for businesspeople. “The word ‘steal’ includes every kind of advantage, and this commandment applies to every trade and profession,” he said. “One can commit a theft in these trades just as well as if you climbed in through a back window. It is as much stealing for you to charge too much for the meat.” Although he mentioned meat, he wasn’t talking only to butchers. “The same applies to tailors, brewers, and others,” he said.

Luther did not merely preach on the Ten Commandments. He wrote hymns about them. Luther’s chorale “Dies sind die heil’gen zehn Gebot (These are the Holy Ten Commandments),” is twelve verses long, and it expresses each of the commandments poetically. J.S. Bach wrote two different organ pieces on Luther’s chorale. Here’s a jaunty setting for hands alone:

Luther also was concerned with what we call sustainability, avoiding practices that deplete natural resources. Sometime between December 28 and 31, 1531, Luther was talking to his dinner companions about agriculture. (We know this because guests took notes that have been preserved in collections of “Table Talk.”) He said, “Horses devour the greatest part of the grain . . . Then the good peasants and townspeople drink up almost as much of the grain in the form of beer.” He believed that these practices led farmers to grow woad, a plant used for dyeing, in place of grain, and he thought that growing woad “has so burned and exhausted the soil that it is beyond all reason.” Were he still alive, Luther would be pleased to know that modern brewers work to limit the stress they place on the environment. They even find creative ways to re-use their spent grain, the malt left over from brewing.

In our last post, we described the 1522 sermon in which Luther proposed beer as an alternative to violence. Luther said he did not use force to spread his ideas but simply ” taught, preached, and wrote God’s Word” and then waited for the good results while he “drank Wittenberg beer with [his] friends.” Luther’s hometown shoutout anticipates modern beer culture’s focus on local brewing.

As we mentioned earlier, Luther urged listeners not to drink to excess. He also told them not to be consumed by thinking about beer.

In a sermon on the Lord’s Prayer, Luther used beer to illustrate the line, “lead us not into temptation.” He thought people might become so concerned with beer that they would be tempted to overlook loftier, spiritual matters. Luther told listeners, “the “Master Devil (Junker Teufel) . . . tempts you by causing you to disregard God’s Word: Oh, I have to look after the beer and malt, I can’t go to hear a sermon.”

Luther’s thoughts on the Lord’s Prayer are relevant even to beer lovers who don’t engage with “God’s Word.” Beer is wonderful, and thinking about beer is fun. But we shouldn’t become so involved in our favorite beverage that we neglect the most important parts of life: friends, family, and health to name just a few.

We’ve created a graphic to help you remember Luther’s beer theses. Please ask your local church or brewery for permission before posting it anywhere on the premises. 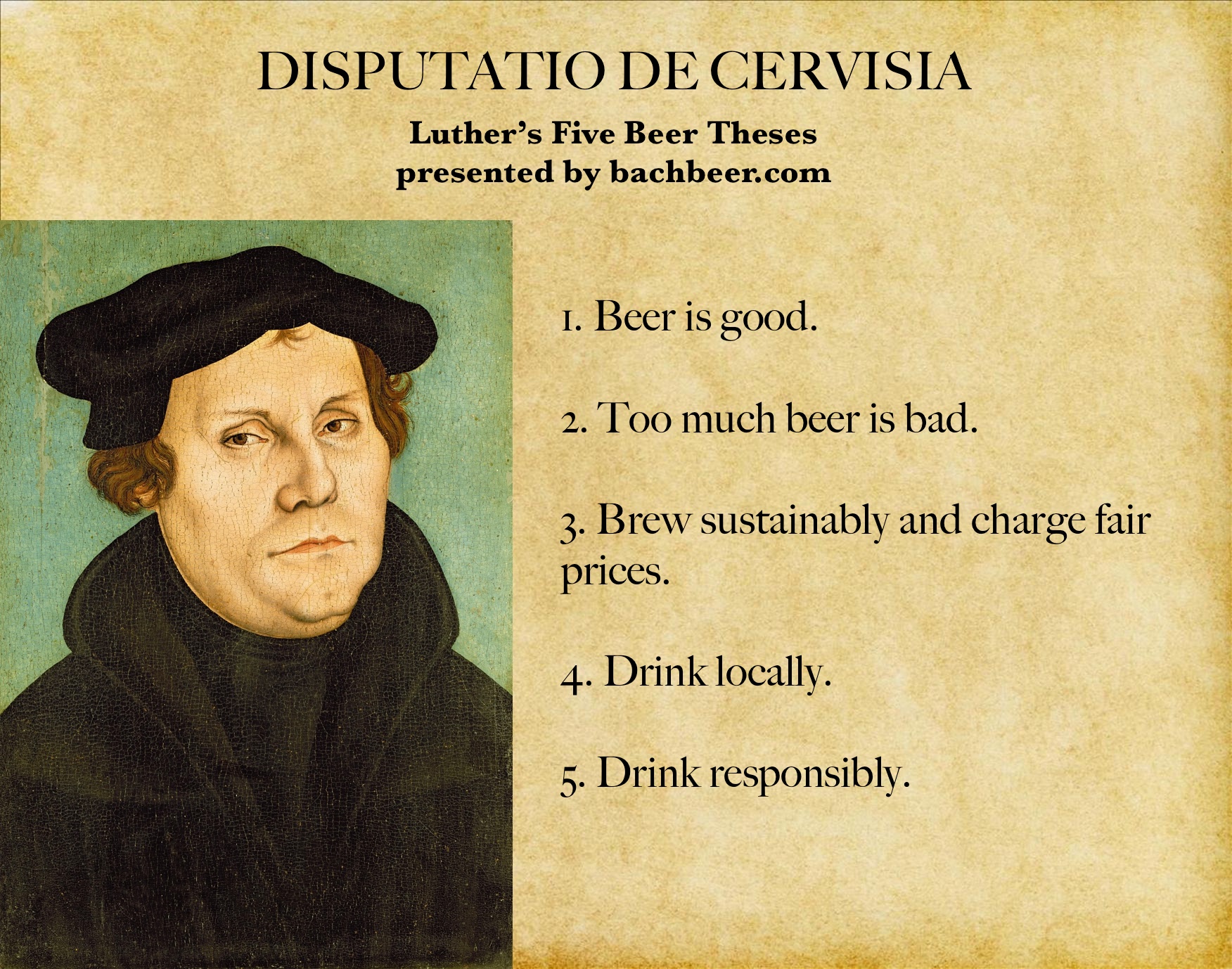